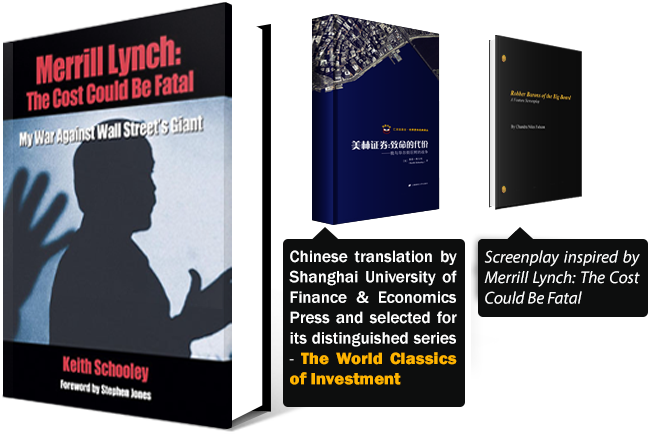 Merrill Lynch:
The Cost Could Be Fatal

My War Against Wall Street’s Giant

In the true spirit of David and Goliath, rookie financial consultant Keith Schooley takes a stand to expose a corrupt corporate culture at one of the nation’s most respected firms.

In an explosive account, Keith Schooley takes on his former employer in a stand to expose internal wrongdoing and cover-ups. In Merrill Lynch: The Cost Could Be Fatal – My War Against Wall Street’s Giant, Schooley’s initial excitement for a new career in finance with Merrill Lynch is clear.

His enthusiasm is soon overshadowed by blatant wrongdoing in this powerhouse financial firm. In a daring move, Schooley decides he cannot look the other way and writes a lengthy memo to company management. Confident things will be put right, Schooley is shocked at Merrill Lynch’s ensuing attempts to keep him quiet. His eventual dismissal and threat of a lawsuit by his boss are followed by further steps to keep him down.

Discover the fascinating details behind:

Merrill Lynch: The Cost Could Be Fatal is a must for all investors; anyone employed in the area of securities, insurance, financial services, employment law, or human resources; as well as anyone with an association with Merrill Lynch. This exposé of corruption and conspiracy on Wall Street strikes at America’s very foundation.

This book is a profile in courage… Schooley illustrates the ways the “powerful and mighty” play the game inside and outside of a court of law, including employing unethical and perhaps illegal tactics… [He] documents a pattern of problems at the firm ranging from brokers to senior management, and suggests that the problems could even be traced to the board of directors… This is a book that should be read by not only Merrill Lynch clients, but all investors.

Quote from Merrill Lynch:The Cost Could Be Fatal —